Chiffon is the adorable chihuahua owned by Raspberry Torte. She was adopted by her in "A Boy and his Dogs".

Chiffon is a baby pink puppy with pink spotted inner-ear to match her curled bangs. She has a small tail and her paws, chest, and mid-face are pale pink. Her nose is dark pink and she has raspberry eyes. She wears a green collar with a striped bow and raspberry.

Chiffon loves accessorizing and playing dress up. She's fairly quiet in comparison to some of the other puppies, and she appears to be a bit timid. She's frequently cold and often hides when warmth cannot be provided.

Originally chosen by Orange, she mistakenly thought that Chiffon was afraid of everything because of her tendencies to hide whenever someone would enter the shop. After Raspberry realized that Chiffon was just cold -due to her small body and thin hair- she dressed her up and connected with the smaller pup, so Orange allowed her to take Chiffon. 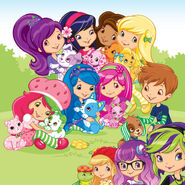