Sadiebug and Kadiebug are two young twin ladybugs who are the cousins of Jadeybug. There home isn't specifically stated however, and they are much younger, meaning they are most likely teenagers. They are two berry naughty twins who often bicker and fight openly and cause problems while visiting Berry Bitty City.

Chances are, the girls live in Berry Big City, the only other location stated in the series, which might explain their bad behavior.

Their appearances in Season 2 have lessened considerably. They have only starred in two episodes: Strawberry's House Pest and Good Citizens Club, while in the rest of the series they've made smaller roles.

Sadiebug and Kadiebug are too naughty Ladybugs that are usually bickering and fighting. They tend to agree on most things, such as what they wish to do, or when making small talk. But they always bicker and argue, choosing to fight over the silliest of things! Such as when Kadiebug stole a straw for her drink, which Sadiebug also wanted, which made them begin to fight for it. Despite being told they didn't even NEED the STRAW to DRINK TEA anyway...

They are very rude and do not care for what they do to others, as long as they get their way and are happy. However, it's become obvious that due to this, many people either do not like them, or can't tolerate them. They're even rude to their own cousin, who tries her berry best to put up with them. It's also shown that after Strawberry snapped at how rude they had been and they stormed out, nobody else wanted them to stay with them while visiting. They did learn to improve their manners however and in their next major appearance, the lesson only stuck, but just barely.

By the time of their next appearance, most of their reputation had been tarnished. They came offering the berry girls to join their "Good citizens club". The others had been hesitant at first and even mention that nobody would even let them in their own clubs due to how much they would fight. Upon getting them to agree, they instantly used Plum to do things once they realized Plum's pin hadn't been mailed to her, so she thought she had to do tasks for them to receive it. But once everyone caught on they apologized and from then on how become much nicer, and less selfish too.

Since then the twins hadn't made many appearances outside of cameos or small roles, so it is unknown if the lessons they learned truly stuck or not. In their final appearance in "Lost and Found", they were very kind to the others during a party for them and even brought the snacks while searching for Strawberry's pets.

Despite being twins, they do share minimal differences. Such as both girls supporting someone else when both Strawberry and Orange for the Berrybest Berryfest Princess.

The ladybug twins looks exactly the same, other than the coloring of their attire. Both of them are purple skinned with hair-like markings framing their heads resembling a single curled bang and side parts. They have bright teal colored eyes and their face are light pink in color. Both girls have curled antennae decorated with beads and ribbons.

Sadiebug has a yellow ribbon with green and red beads, while the other has orange ribbon with lilac and yellow beads. Kadiebug has a blue and green bead with pink bow, and light pink bow with purple and yellow bead. For attire, they do not wear shirts, but instead long brightly colored pants with belts and rain weather-like boots and double necklaces with a strawberry emblem in the center and bracelets on their left wrist.

Sadiebug's pants are yellow and orange striped while her belt consist of purple, yellow, green, blue, and pink stripes while the center is orange-red and the circle is purple. Her boots are aqua colored with red bottoms and buttons. Her necklace is purple, on her wrist is an orange wristband, and two thin bracelets, one green and the other purple.

Kadiebug's pants are multiple shades of purple-pink while her belt consist of yellow, pink, teal, and purple, the middle is green while the circle is red. Her boots are pink while the bottoms and buttons are red. Her necklace is white, on her wrist is an green wristband with a purple and blue bracelet.

For the Glimmerberry Ball, Kadiebug wore a light purple shirt with puffed blue sleeves and lilac polkadots, along with a long orange-yellow skirt and a pink headband with small blue bow. Sadiebug wore an orange top with yellow polkadots and lilac sleeves, her skirt being ivy green and she had a teal headband with pink bow.

Being denied a stay 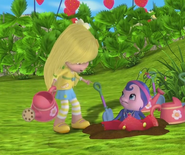 Bickering over a banner
Community content is available under CC-BY-SA unless otherwise noted.
Advertisement