"We do not shrink when faced with a production challenge! We rise to it!"

Mavis Maraschino is one of the minor characters featured in Strawberry Shortcake's Berry Bitty Adventures.

Mavis is a residence of Berry Big City. She works as the hostess of the fashion TV shows "Fashion Further Forward" and "Berry in the Know", and does her own journalistic work of interviewing celebrities or taking upcoming fashion stars as her protégé.

Mavis is a pale pink ladybug with small dark grey eyes worn behind hot pink glasses. She has thick, spiked white hair and has a pair of dark indigo antennae. Her body is light grey. She wears a lot of makeup and has a flamboyant design to match her loud personality.

Her outfit is composed of a black long-sleeved dress with a pale fuchsia boa and long hot pink beaded necklace. She has on black and white zebra-styled tights and wears hot pink boots with large, feather pale fuchsia cuffs.

Mavis is a somewhat snobby ladybug who has high standards and has no problem putting down whoever or whatever doesn't fit them. She is oblivious to the inconvenience she causes others and is not very friendly unless she is working with a celebrity or someone she is working with, due to general enjoyment of them or because she doesn't want to get on their bad side.

She is obnoxious, bossy, patronizing, and often a busybody with a lot of determination. She refuses to give up whenever she sets her sights on something. She is unable to understand how the girls can enjoy such a calm and small lifestyle compared to that of the fast-paced Berry Big City. She also cares a lot about her looks and can get really mean if they are threatened or ruined in front of others.

Mavis Maraschino is introduced in "A Star is Fashioned": while Raspberry stayed at Berry Big City, she met Mavis and became her protégé. As a part of the show segment on Raspberry and her fashions, Mavis instructed her how to act, dress, speak and in general behave as fit to "the future fashion star of Berry Big City". Raspberry came to Berry Bitty City to pack her belongings, and Mavis accompanied her. It took Mavis only a few seconds since her arrival to make everyone dislike her for her very unpleasant behavior. Eventually, Raspberry has grown sick of the way Mavis treated her friends, and refused to listen to her anymore. Mavis ended up falling into the lake and got soaking wet, to her embarrassment and the amusement of the girls. Soon she departed, complaining she had nothing prepared for her next show. No one was sorry to see her leave.

Mavis arrived at Berry Bitty City for the second time when the girls were about to spend a vacation in their new home-made resort. Her behavior was even worse than during her previous visit. She insisted on interviewing Cherry for the first episode of her new show "Lifestyles of the Berry Big Bitty Stars". Cherry made it clear she was not interested to appear on Mavis' show, but Mavis would not listen. She kept getting on everyone's nerves to the point that all the girls became angry and considered asking her to leave - what was never done before in Berry Bitty City. The girls played a prank on Mavis, to make her think there were dangerous monsters and storms on Berry Bitty City, but it only encouraged her to stay. She announced that she would change her show, instead of celebrity reporting to an extreme adventure series titled "Mavis Maraschino against nature", and stay permanently at the resort. The girls then moved to plan B: they prepared a fake magazine with a story about traveler's adventure in some exotic perilous island. Mavis fell for it and immediately prepared for travelling to the imaginary island. The girls regretted lying to Mavis and told her the truth, but she wouldn't listen, announcing that if there was no such island - there soon would be, and she would discover it. Then she and her assistant left, to the relief of everyone.

In Season 4, Mavis is the hostess of the fashion talk show "Berry in the Know". She holds an online fashion contest with a technology theme.

Mavis visited Berry Bitty City for the third and last time to interview Cherry about the song "Dance Puppy Dance". Her visit was unwelcome on any circumstances, but her timing was really bad: Cherry was in unpleasant mood because of that song, and the last thing she needed was Mavis' nonstop pestering about it. Later, Cherry tried to trick Mavis into helping her unwittingly to bash the song, and it nearly worked, but a slip-up made Mavis realize what was going on. 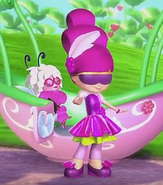 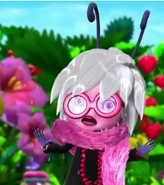 A lesson in humiliation