Mr. Longface is one of the minor characters featured in Strawberry Shortcake's Berry Bitty Adventures. He is a caterpillar and resident of Berry Bitty City. He moved in sometime before the events that took place in the pilot movie "Sky's the Limit" and runs the Berry Bitty Mini Golf Course.

He is also friends with Berrykin Bloom.

Mr. Longface is a very proper caterpillar. He enjoys intricacies and the arts and can often be found admiring scenery, reading, writing, painting, or baking. He is very exuberant in his speech and likes to use big, fancy words that only Blueberry knows the definition of.

He also prefers to stay on the top of all news and information going on in Berry Bitty City. As such, he knows what many of the citizens like and what they are doing. He also likes to help in whatever way he can, even jumping into uncharted territory.

Mr. Longface is sometimes at the unfortunate end of a joke and is often quick to jump to conclusions on things he does not know about or did not research enough. However, he is usually a good sport and never loses his temper, though he frightens rather easily...

In the end, he cares very much for all the citizens of Berry Bitty City and always tries to keep things running as smoothly as it can be. 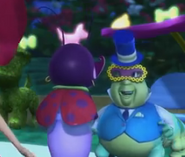 Walking With The Berry Bitty Girls