Postmaster Bumblebee is one of the minor characters featured in Strawberry Shortcake's Berry Bitty Adventures. He is a resident of Berry Bitty City. He is the manager of the post office and one of the mail carriers.

Postmaster Bumblebee is very nice and polite. He is a very efficient manager, who makes sure the post items will be delivered on time to their addressees, but also looks after the welfare of his employees.

Postmaster Bumblebee's skin is colored with yellow and brown stripes. He has brown hands, curled antennae and a pair of wings. The front of his face is ivory, and the back is brown. He has large brown eyes, white eyebrows and a thick white moustache. He wears a small pair of glasses, blue pants, a white shirt, a blue vest, a blue bow tie with green spots and a mailman's hat with a strawberry sticker. He carries a blue mail satchel with a strawberry sticker.

A package for Raspberry 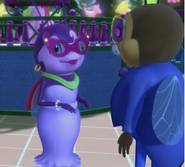